Our Wild Cats 101 blog series is here to answer all your wild cat questions and curiosities. First up, we have a commonly asked question on Panthera’s social media platforms; what’s the difference between a jaguar and a leopard? Continue reading to learn more about these two big cat species!

What’s the difference between a jaguar and a leopard?

These spotted felines may look similar but they’re two very different species. The easiest way to tell them apart is by asking where you are. That’s because leopards live in Africa (and some parts of Asia) while jaguars exist on the other side of the world throughout Central and South America.

Besides geography, these two big cats have other distinguishing behaviors. If big cats had superhero personas, leopards would be Spider-Man and jaguars would be Aquaman. Leopards are the only wild cats that are known to drag their meals into trees. They do this to protect themselves and their food from lions and other predators who would try to steal it. The jaguar’s “superpower” is that it's the most aquatic of all seven big cat species. They can thrive in a variety of wet habitats including flooded forests and the Brazilian Pantanal wetlands.

These two big cats also differ in their hunting behavior. Leopards use their agility to hunt animals like impala and springbok, killing their prey with either a suffocating bite to the throat or the back of the neck. Jaguars, on the other hand, use their powerful jaws to crush the skulls of species such as capybara, peccaries, and reptiles. 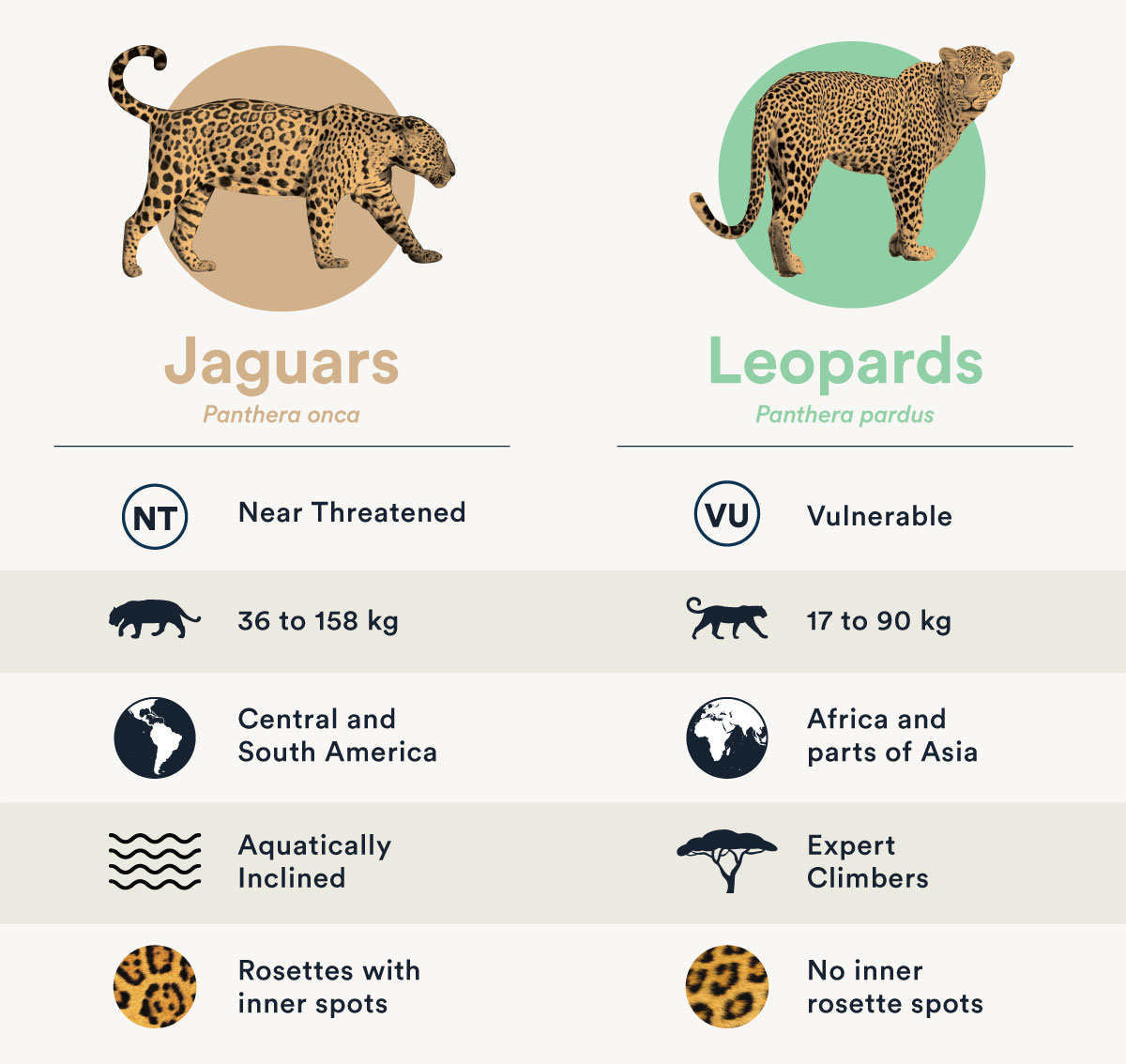 If you look closely, you can easily tell the difference between the coats of these two big cats. While leopards are covered in more solid spots and rosettes, jaguars sport blocky rosettes with distinct internal spots. There are other physical differences between the two as well. Jaguars on average are stockier and heavier than leopards and have a distinctive blockiness to their heads. Leopards have leaner builds and longer tails that assist their arboreal excursions.

"Even experts can take quite a bit of time to decide whether it’s a leopard or a jaguar, depending on the photo and what it shows. It’s all in the rosettes! If you get a view of the side of the cat, bingo, you have the holy grail of the distinction: jaguars have spots in the middle of their spots."

What about black panthers?

A black panther is not a separate species of big cat, rather, it is a term given to specific cats that have dark coloring, called melanism. Both jaguars and leopards (as well as many other smaller wild cat species) can exhibit this melanism. This has led to the term “black panther” being used to describe both leopards and jaguars over time.

These black cats still have their spots and in the right light, you can see them underneath their darker coloring. Black leopards are most common in tropical Asian populations and the montane forests of Africa. It is much rarer to find photos of melanistic jaguars and they are more commonly found in lowland tropical forests than they are in the northern part of their range.

How is Panthera involved with these big cats?

In the Americas, Panthera helped to create the bold Jaguar Corridor Initiative to connect core jaguar populations from Mexico to Argentina. We are leading or supporting efforts in a dozen jaguar range states. This includes preserving habitat, preventing poaching, and working with communities to increase tolerance for these big cats with education and anti-predation ranches. We’re proud to have played a large part in the Jaguar 2030 Roadmap; a range-wide effort that unites country governments, organizations, local communities and the private sector around a shared vision to conserve jaguars and their valuable ecosystems.

Our leopard work is ramping up as well. Panthera and our partners are developing monitoring networks that can track changes in leopard populations to create better management plans. We’re also working across the landscape to remove snares and prevent poaching of leopards and their prey. In the years to come, we will continue to expand our important leopard conservation work including protecting habitat, reducing poaching and working with communities to provide highly realistic alternatives to the use of real leopard skins in traditional ceremonies.

What other wild cat topics would you like to learn more about through this blog series? Leave us a comment with suggestions for future Wild Cat 101 installments!

Learn more about jaguars and leopards.