This is the fourth installment in our series meant to shine a light on the 33 species of small wild cats found around the globe. You can read our first blog on the flat-headed cat here, our second installment featuring the fishing cat here and our third blog about the jaguarundi here.

Our newest small cat species getting the spotlight treatment is the unique fan favorite: the serval (Leptailurus serval)! With their big ears and funky movements, these small cats are much loved across the continent and around the world. However, what most people don’t know is that this species is threatened by poaching and habitat loss and needs our help.

Known for their distinctive ears, these wild cats sport both dark spots and blotches on their tawny coats. Closely related to the caracal and the African golden cat, this medium-sized cat is known for being exceptionally tall with long legs. Some individuals sport what’s called a “servaline” pattern and melanistic (black) servals are common in certain areas across the continent close to the equator.

Servals have the largest ears (relative to their size) of any feline — so large that they almost touch in the middle of the head. These wild cats are built for height rather than speed. Elongated bones and enlarged ears help this feline specialize in catching small prey, usually by pouncing on them. Their tail is also much shorter proportionately than other wild cat species.

These small cats are found in over three dozen African countries south of the Sahara Desert. Servals live in a diverse variety of habitats including forest, savanna, grassland and wetlands. They can live in a variety of different habitats including savanna woodlands, grasslands and dry-humid forests associated with rivers, marshes and floodplains. Servals have also been recorded living on various types of farmland where they seem to target rodents.

The serval’s proportionally long legs allow them to move quickly through grasslands targeting rodents and other small mammals as well as grassland birds and occasionally reptiles, amphibians or arthropods. Unsurprisingly, these cats are Olympic-worthy jumpers and can even catch birds in flight with a single vertical leap, sometimes higher than 2 meters.

Servals generally live solitary and territorial lives although adult home ranges do seem to overlap. They usually hunt at night or during sunrises and sunsets, although daytime hunting is observed more commonly during cold weather or for mothers with kittens. These small cats are vulnerable to larger predators like leopards, lions, crocodiles and dogs. Kittens are especially at risk from predators, particularly when the mother leaves them hidden to go hunt.

The serval is listed on the IUCN Red List as Least Concern but significant data gaps remain on overall densities, range and trends. While there are hunting regulations for the species across their range under CITES, servals are still threatened by poaching. For example, in southern Africa, serval pelts are still prized for ceremonial purposes. An additional but lesser threat to servals and other small cats is the live pet trade, however, the extent to which these cats are removed from the wild vs bred in farms has yet to be assessed.

In southern Africa, large numbers of cats are purported to be killed opportunistically and illegally by farmers simply because of the real or perceived threat that they pose to livestock. Serval may prey on poultry and be persecuted as a result. Additionally, they may also be caught in traps set for other carnivores such as black-backed jackal or caracal. 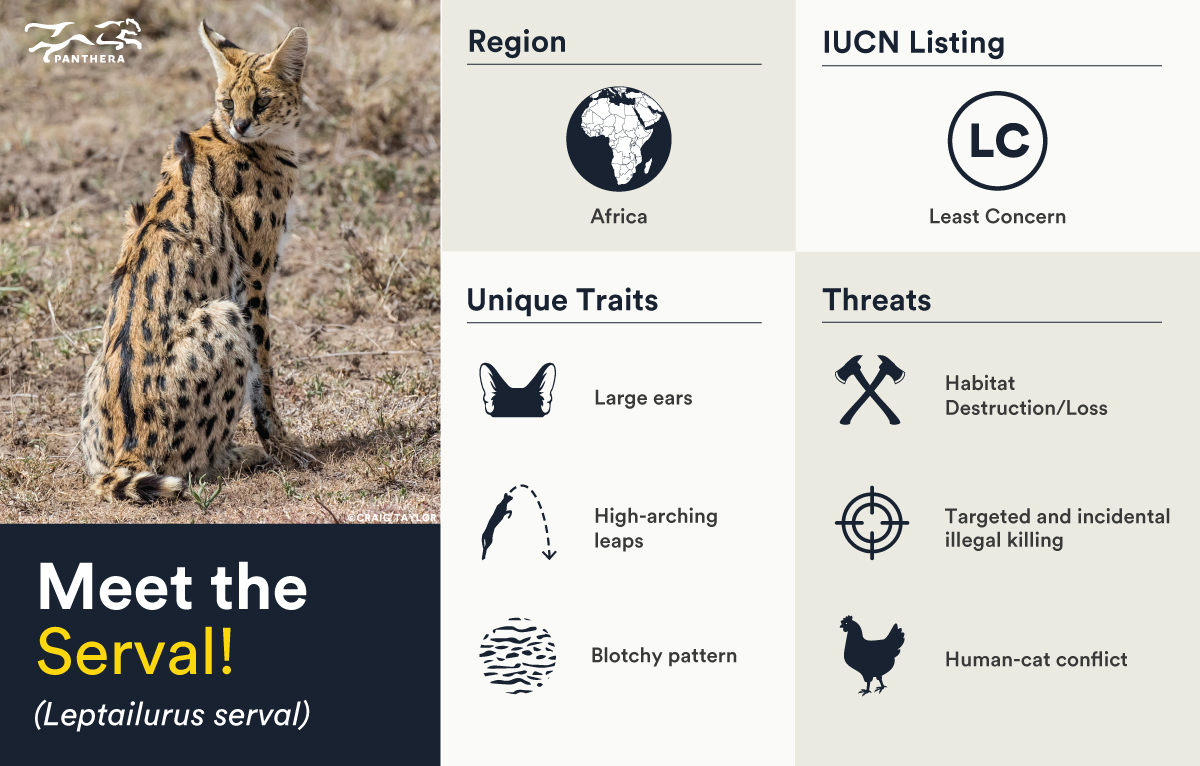 As one of our focal species in Africa, Panthera aims to accurately assess the conservation status of the species, develop a targeted action plan and stabilize or increase populations across 20% of their range in the next decade. At the national and regional levels, our projects and interventions are largely multi-species. Our work to build capacity in SMART and Anti-Trafficking across KAZA, and more broadly in the key countries of Zambia and Zimbabwe in the case of SMART, is of benefit to all wild cat species as well as other high-value species.

While our Furs for Life program is mainly targeted to address the poaching of leopards for ceremonial uses, serval skins are also used in these ceremonies. Within the program is the Saving Spots Project where we work with the Barotse Royal Establishment of the Lozi people in Zambia. Together, we are replacing real furs used in their traditional ceremonies with synthetic leopard — and serval-patterned skirts and lion mane-trimmed berets, all created by Panthera.