This is the third installment in our series meant to shine a light on the 33 species of small wild cats found around the globe. You can read our first blog on the flat-headed cat here and our second installment featuring the fishing cat here.

Despite its unique facial expressions and wide Mesoamerican range, the jaguarundi (Herpailurus yagouaroundi) may be one of the least-known of the small cat species to the general public. Unlike what their name may imply, these small cats are more closely related to pumas than they are jaguars. While they aren’t considered endangered, scientists don’t know nearly enough information about this species to adequately protect them in the face of decreasing habitat across Latin America. In 2020 and beyond, Panthera is aiming to change that by increasing and compiling research on this slinky feline.

They are perhaps most easily recognizable because of their distinct pointed face accentuated by rounded ears. Jaguarundis have long bodies and tails but relatively short legs. Unlike most wild cat species, the jaguarundi sports a solid coat mostly without spots, stripes or patterns. Their coat can be any number of colors ranging from reddish-brown to black with the redder ones sometimes called eyra. Howard Quigley, Panthera’s Jaguar Program Director believes that darker-colored jaguarundis could even be responsible for some of the “black panther” sightings in Mexico and Central America.

These small cats can be found in 19 different countries in Central and South America, from Mexico through Argentina living alongside other wild cats like jaguars, pumas and ocelots. These felines are occasionally spotted in the southern areas of the United States as well. Inhabiting mainly lowland areas, the jaguarundi’s habitat range is the widest of any of the small neotropical cats. Unlike other cat species, they seem to tolerate human-disturbed landscapes to a greater degree.

From what we know, the jaguarundi tends to eat smaller mammal species such as mice, rats and armadillos as well as various types of reptiles and ground-nesting birds. They’ve even been observed catching fish from drying ponds and are known to be capable swimmers. They’re often targeted by humans because they can be a nuisance to those farmers whose poultry they prey upon.

While research into these cats is scarce, we do understand them to be mostly solitary. These small cats are believed to be much more active during the day (diurnal) than other felines in the region. Like other wild cats, they primarily use scent-marking to communicate with potential rivals and mates. Jaguarundis are vulnerable to larger cats like pumas, as well as domestic dogs and occasionally even large snakes like the Boa constrictor.

While some populations of jaguarundi are listed as endangered under the Endangered Species Act, the IUCN Red List currently identifies the species as “Least Concern.” However, habitat disturbance is increasingly becoming a threat to this wild cat, as it is to all its feline cousins in Latin America. This includes the increasing threat of new oil palm plantations. While they aren’t typically hunted for their fur, there is still conflict between jaguarundis and people — mostly over their taste for farmers’ chickens. These small cats have also increasingly become roadkill because of human encroachment into their habitat. 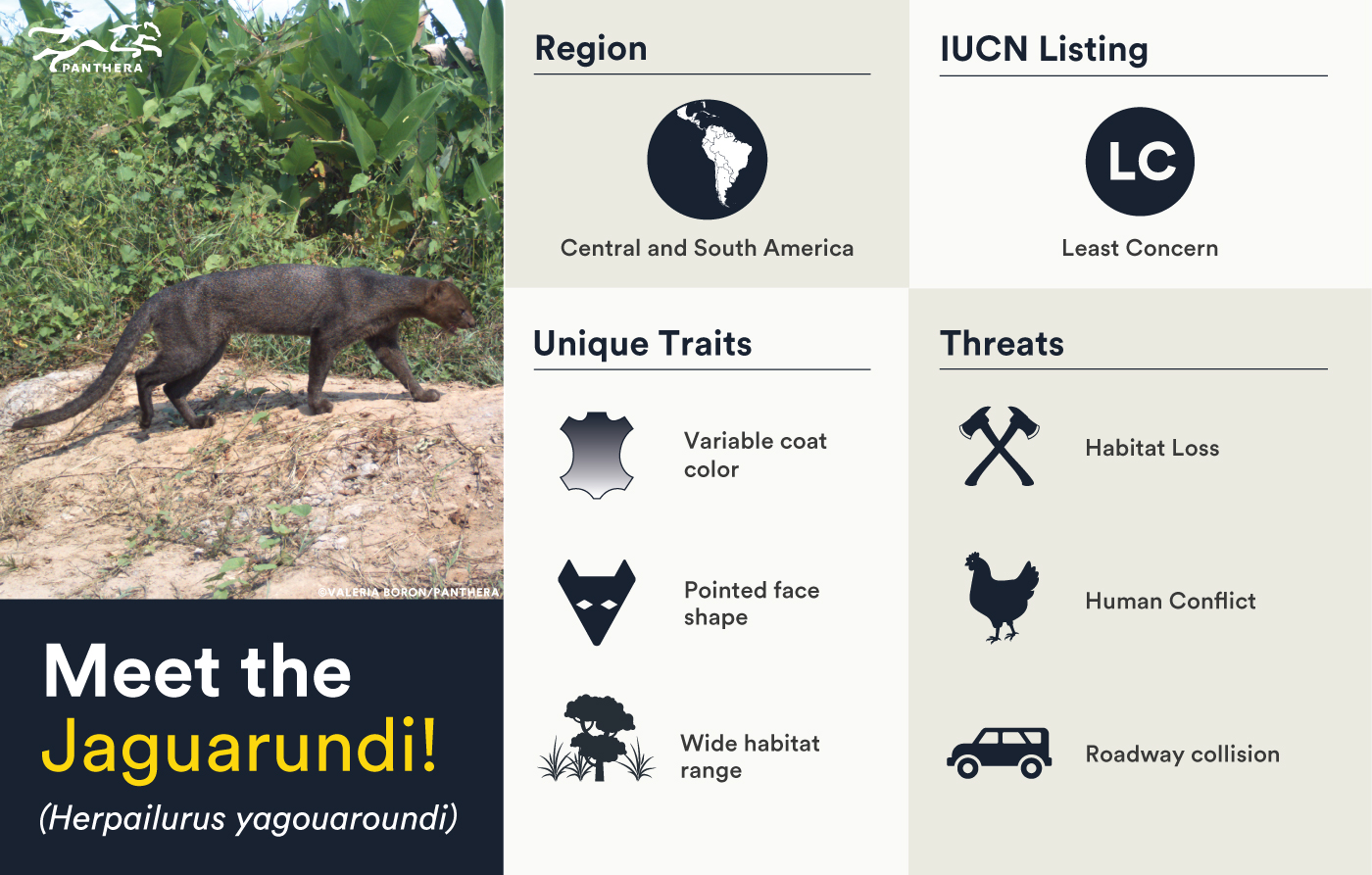 Panthera researchers are working to compile available data on this small cat. Unfortunately, there isn’t enough information out there just yet. According to Panthera Researcher Bart Harmsen, “Jaguarundi are usually detected within surveys, but records are so low that single studies never have enough data for any type of analysis."

This is the first time we decided to combine efforts and make sure that at the range-wide scale of Panthera projects we will do some basic analyses on what the species is about. We’re also looking into further analysis of how the jaguarundi interacts with neighboring small cats such as margay and ocelot within different habitats and population dynamics.