For our sixth installment of Small Cat Spotlight, we’re turning our attention to North America’s very own bobcat. The bobcat (Lynx rufus) is a beacon of American wildlife with its unique features presenting a memorable silhouette that competes with even the mighty puma. Learn more about this small cat and Panthera’ programs to study and protect them across their range.

These medium-sized cats have a stocky build with long legs and a short tail. Although sometimes confused with house cats, these felines are on average two to three times the size of a domestic pet. The largest and heaviest bobcats tend to be found at the northern limit of their range, particularly where they overlap with Canada lynx (Lynx canadensis). These individuals also tend to be paler with less distinctive markings than their southern counterparts.

Bobcats are perhaps best known for their unique facial ruffs and black and white ears. Melanism in bobcats has been recorded in Florida, albeit rarely. Bobcats are similar in appearance to the Canada lynx, and as they co-occur in some habitats, they can often be confused for one another. Generally, the bobcat will be smaller and shorter with distinct black rings and a white underside on its tail.

Bobcats can be found across southern Canada, throughout the contiguous United States and down into parts of Mexico. These small cats can tolerate a wide variety of habitats, preferably those with dense vegetation cover. However, their habitat can include forests, grasslands, deserts, swamps and rocky settings. These small cats are often spotted close to people in neighborhoods or even urban landscapes.

While the bobcat’s diet primarily consists of smaller vertebrates such as lagomorphs (i.e. rabbits), they have been known to take down herbivores as big as white-tailed deer or bighorn sheep. Their diets fluctuate based on the season and prey availability and can vary based on location. Like most wild cats, bobcats either stalk their prey silently or use the wait-and-ambush technique.

Bobcats are solitary, and adults usually only interact with mates. Females will usually have litters of two to three (but sometimes up to six!) kittens. The offspring will reach independence and disperse by two years of age. Bobcats use urine and scraping to mark their territories. For males, these territories can be quite expansive at two to five times the size of those of females.

Bobcats are poorly managed across their natural range, and Panthera is studying the species in a number of sites across the United States. In New York, we currently partner with the New York Columbia Land Conservancy and a number of private landowners to understand bobcat population numbers and habitat use, using camera traps and GPS collars. The methods and analyses will form the basis of a monitoring protocol that will result in better management for the species.

In Washington State, we study bobcats as part of our Olympic Cougar Project, which partners with six indigenous tribes, including the Lower Elwha Klallam Tribe, to work for puma connectivity across the I-5 highway. Similar to the New York project, we are currently implementing camera trapping and GPS collaring to gain a better understanding of their ecological role in this unique landscape. Additionally, we are investigating cougar-bobcat competition and co-existence, as well as their economic benefits to people — including controlling rodents that affect timber production. 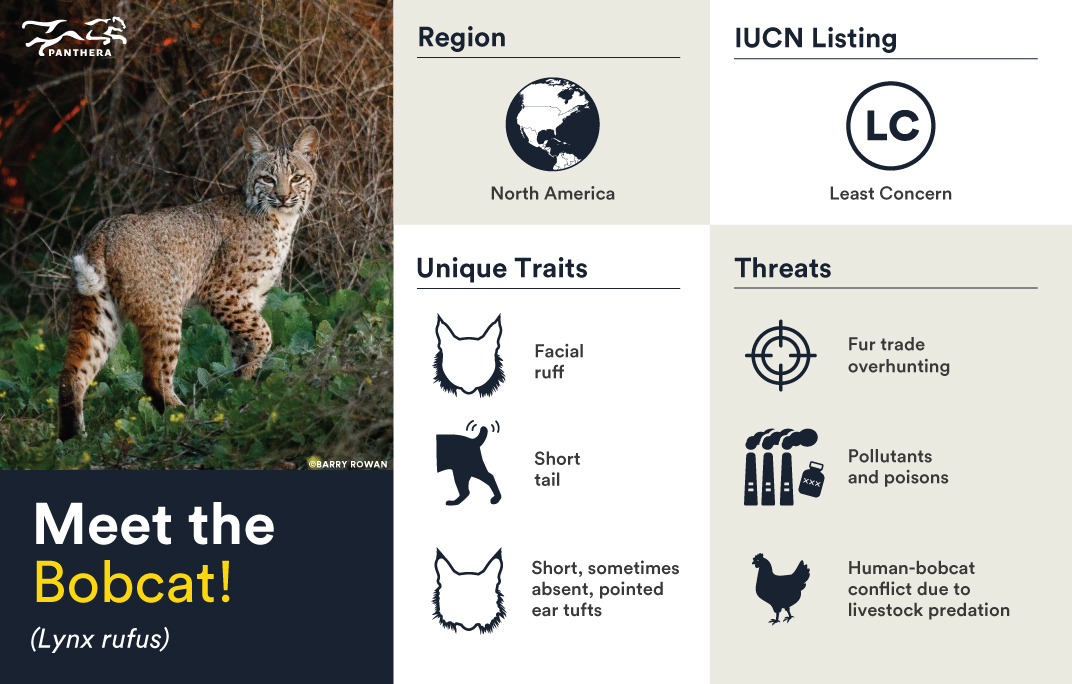