Tigers, Clouded Leopards and Leopards Among the Top Ten Apex Predators Most Threatened by Global Roadways

500 protected areas estimated to be severed by future road developments in Brazil, Nepal and African continent

New York, NY – Tigers and clouded leopards in Asia, leopards in Asia and Africa and Iberian lynx in Spain are among 36 apex predators most threatened by the current global road network, according to a new study published in Nature’s Scientific Reports from Panthera, the global wild cat conservation organization, and partners. 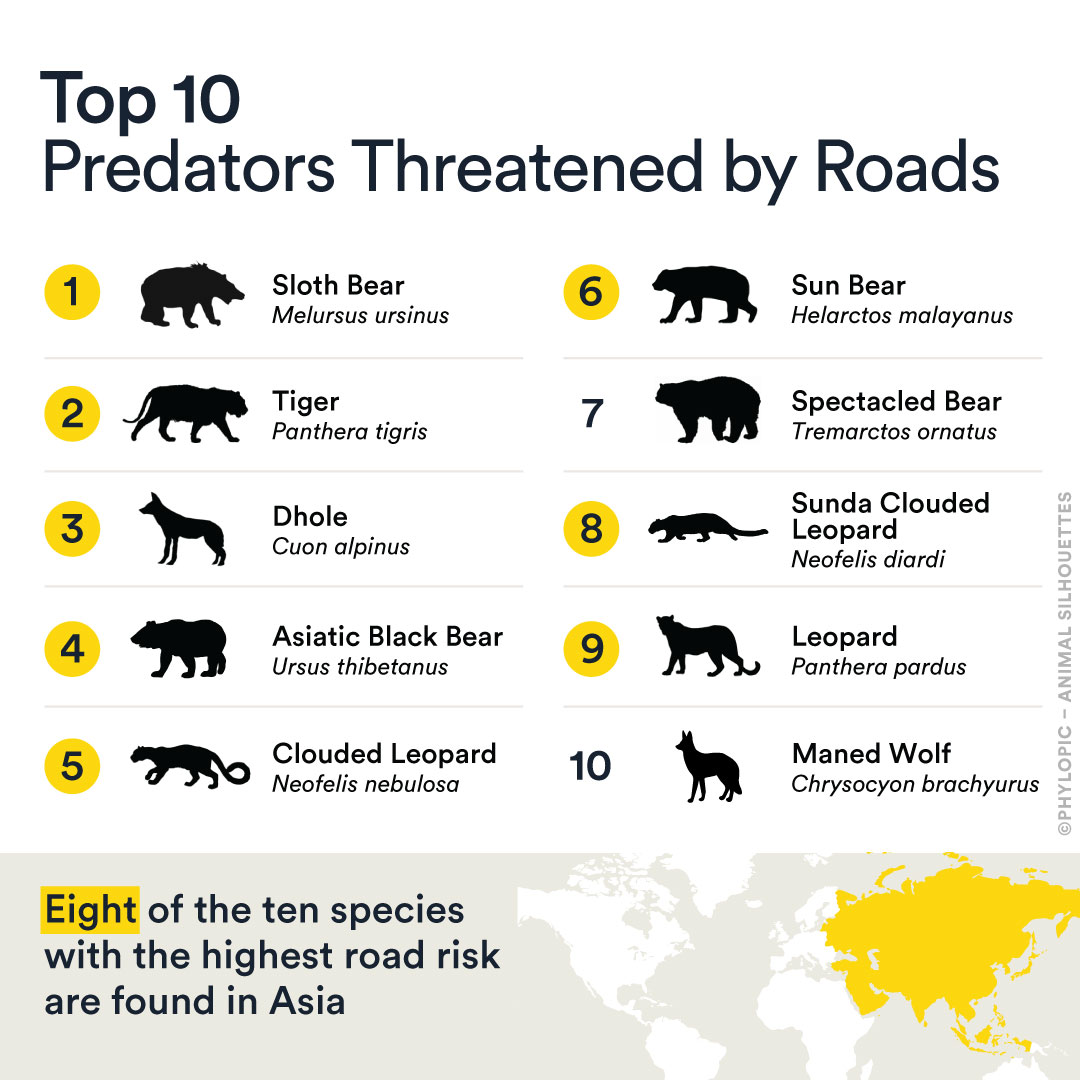 With wild cats bearing a substantial burden of road risk, scientists found the sloth bear faces the highest risk of all apex predators, followed by the tiger and dhole. The study confirmed eight of the ten species with the highest road risk are found in Asia, with other high-risk species located in the Americas, Africa and Europe. Collisions, habitat loss and fragmentation, reduced genetic connectivity caused by physical barriers and increased poaching facilitated by access to wildlife habitat represent the greatest roadway threats to apex predators.

Scientists additionally developed a replicable method to assess the impact of unprecedented proposed road developments in the Brazilian Amazon, along Nepal’s Postal Highway and throughout the African continent. Findings estimated roughly 500 protected areas will be severed by such projects, threatening the survival of apex predators, their habitats and the ecosystem services provided to human communities.

Panthera Furs for Life Project Coordinator Jeffrey Dunnink, one of the study’s authors, stated, “From wildlife-vehicle collisions to unintentionally creating new pathways for poachers to target our planet’s most cherished wildlife, roads are a major threat to apex predators, and our research confirms this threat will only intensify over the next 30 years. Big cats in particular bear an overwhelming burden of road risk, demonstrating the species’ need for increased conservation attention and dollars.”

Dunnink continued, “While roads can often lead to positive social and economic outcomes, future road developments need to be strategically planned and adopt effective mitigation measures like safe-crossing zones to ensure they do not severely impact wildlife and, ultimately, the functioning of our planet’s ecosystems that determine the health and survival of so many human communities.”

The study reveals how current transportation infrastructure and planned global expansion of road networks, including 25 million kilometers of roadways to be constructed worldwide by 2050, in regions of rich biodiversity have and will continue to significantly sever connections and severely impact apex predators.

To protect some of the planet’s most critical keystone species and overall biodiversity, scientists are calling for meticulous road development planning with wildlife in mind, the use of effective threat mitigation measures, including crossings and roadside fencing serving as wildlife funnels, and the avoidance of road construction in protected areas and predator strongholds.

Scientists maintain the significance of road planning committees incorporating the voices of all stakeholders, including local communities, conservation scientists and government officials. Similarly, development financiers are encouraged to further integrate road threat mitigation into their funding agreements, ensuring that the ultimate objective of no net biodiversity loss is maintained throughout the development process.

Development planned in Tanzania’s Serengeti National Park in particular is expected to devastate one of the world’s greatest animal migrations, causing a domino effect on healthy apex predator populations. While Nepal has been hailed in recent weeks as a success story for recovery of the tiger, the country’s road developments will bisect strongholds for the species and threaten to reverse incredible progress made in saving the last 4,500 wild tigers from extinction.

Apex predators are particularly vulnerable to vehicle collisions due to their extensive home ranges requiring travel across roadways and the species’ small population size. Between 1990 and 2020, 229 wildlife vehicle collisions were documented for Iberian lynx. High mobility predators like wild cats are particularly susceptible to genetic inbreeding as well, with ocelots in southern Texas suffering alarmingly low genetic diversity due to extensive road developments.

Panthera has long recognized the importance of access to uninterrupted migratory paths on wild cat species. Panthera’s biologists track the migratory routes of wild cats through the use of GPS collars and by working directly with local communities. Using the data collected, Panthera advocates for strategic safe crossing zones, such as underpasses, bridges, tunnels and arboreal crossings.

Although often considered the gold standard in conservation, Costa Rica hosts the highest density of roads in Central America, with one stretch of the Limón-Moín route 257 responsible for 4.6 wildlife roadkills per hour, primarily due to speeding. Founded in 2011, Panthera’s Wild Cats Friendly Roads Project in Costa Rica collaborates with the government to guide sustainable development of roadways to avoid wildlife deaths, sometimes luring jaguars to crossings with Calvin Klein’s Obsession cologne.

On the Olympic Peninsula in Washington state, Panthera is additionally partnering with the Department of Transportation, the Lower Elwha Klallam Tribe and a number of other First Nations to develop wildlife crossings on Interstate 5 that seek to improve the genetic diversity of pumas. Panthera is supporting a similar initiative in Mexico’s Calakmul region.

About Panthera
Panthera, founded in 2006, is devoted exclusively to preserving wild cats and their critical role in the world’s ecosystems. Panthera’s team of leading biologists, law enforcement experts, and wild cat advocates develop innovative strategies based on the best available science to protect cheetahs, jaguars, leopards, lions, pumas, snow leopards, tigers, and the 33 small cat species and their vast landscapes. In 39 countries around the world, Panthera works with a wide variety of stakeholders to reduce or eliminate the most pressing threats to wild cats—securing their future and ours. Visit panthera.org.