One morning last July, I woke just outside the Zhaxilawu monastery to the sound of howling dogs. The monastery lies in China’s Qinghai province, where Panthera, the Snow Leopard Trust, and Shan Shui have partnered to research and protect snow leopards and their landscapes.

In addition to working with local communities to protect livestock, livelihoods, and snow leopards, the partners also conduct extensive research on snow leopards behavior and ecology. Little did I know, but the dogs’ barking that morning would eventually contribute to that research.

At the time, I was worried that the dogs were fighting, so I got out of bed to investigate. Outside in the freezing cold, I found all ten dogs staring up the mountain. I followed their gaze to the side of the mountain and saw a group of blue sheep staring back at us. 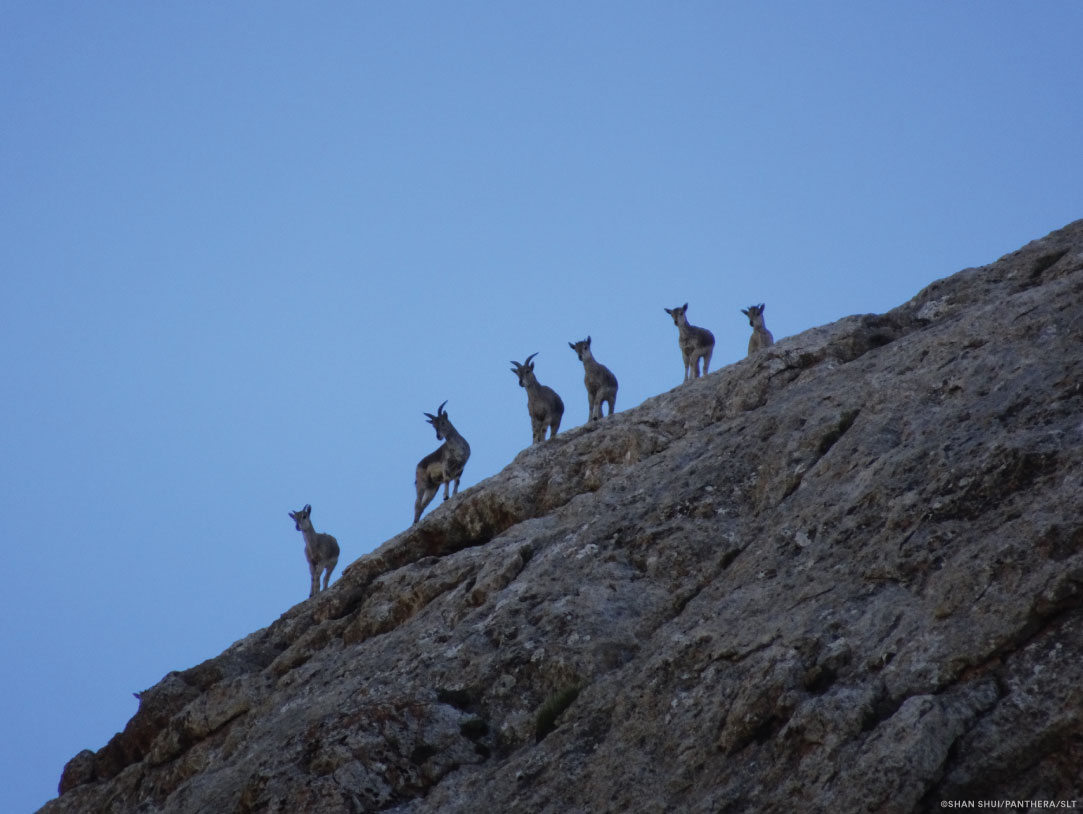 Suddenly, the dogs took off, racing towards the sheep. The sheep immediately began to run, and I followed. Had anyone been watching from above, they would have seen a curious sight: a man pursuing ten dogs pursuing a group of sheep. Fortunately, the sheep ran much faster than the dogs… and the dogs, I admit, ran much faster than I did!

The sheep stopped on a steep section of rock, and the dogs disappeared below them, trying to find a way to get closer.

Suddenly, I heard the dogs howling again. Thinking they might have caught a sheep, I scrambled to catch up and soon saw the reason for all the commotion: just ten meters away was a huge brown bear, growling.

The sheer size of the group of dogs forced the bear to retreat into a small cave. Stunned, I moved away so I could take a picture from a safe distance. 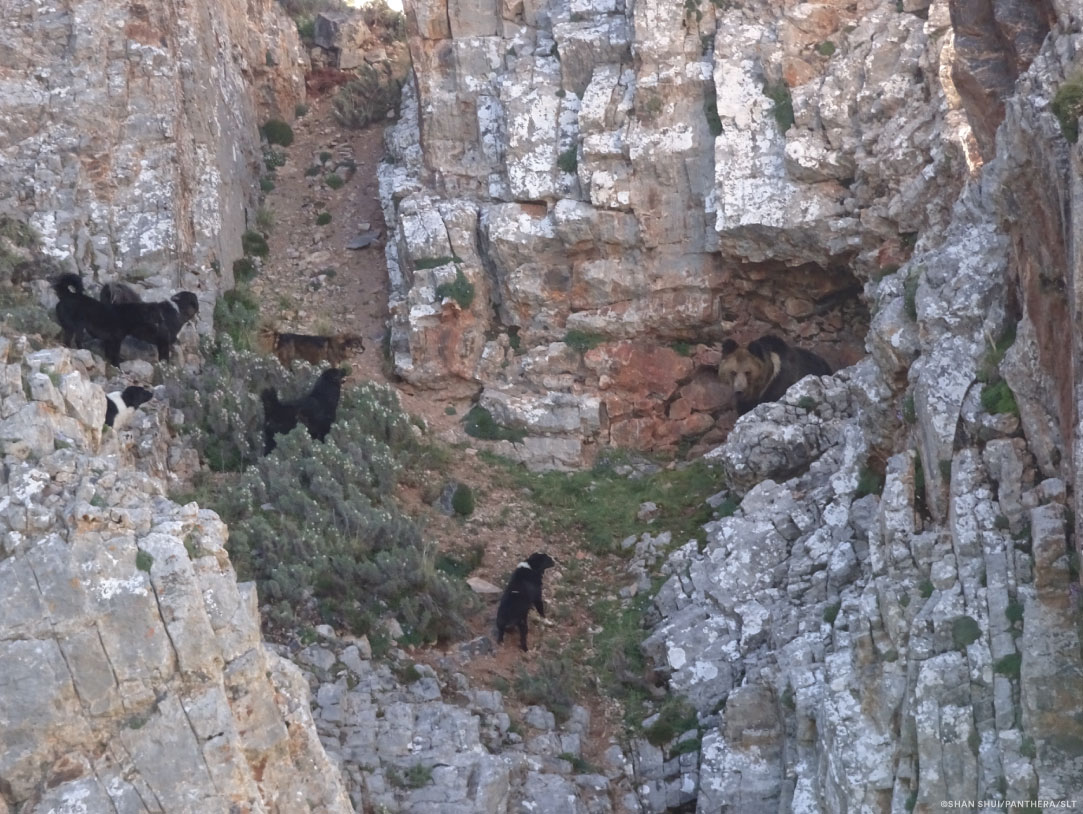 After taking a few photos, I headed back down the mountain with the dogs close behind. I decided to come back the next day with a guide and place a camera trap near where the bear had been.

The next day, a local guide and I set out early with the dogs. As we approached the cave, the dogs began howling and running again. I handed the guide my camera since he is a faster climber and he ran ahead. 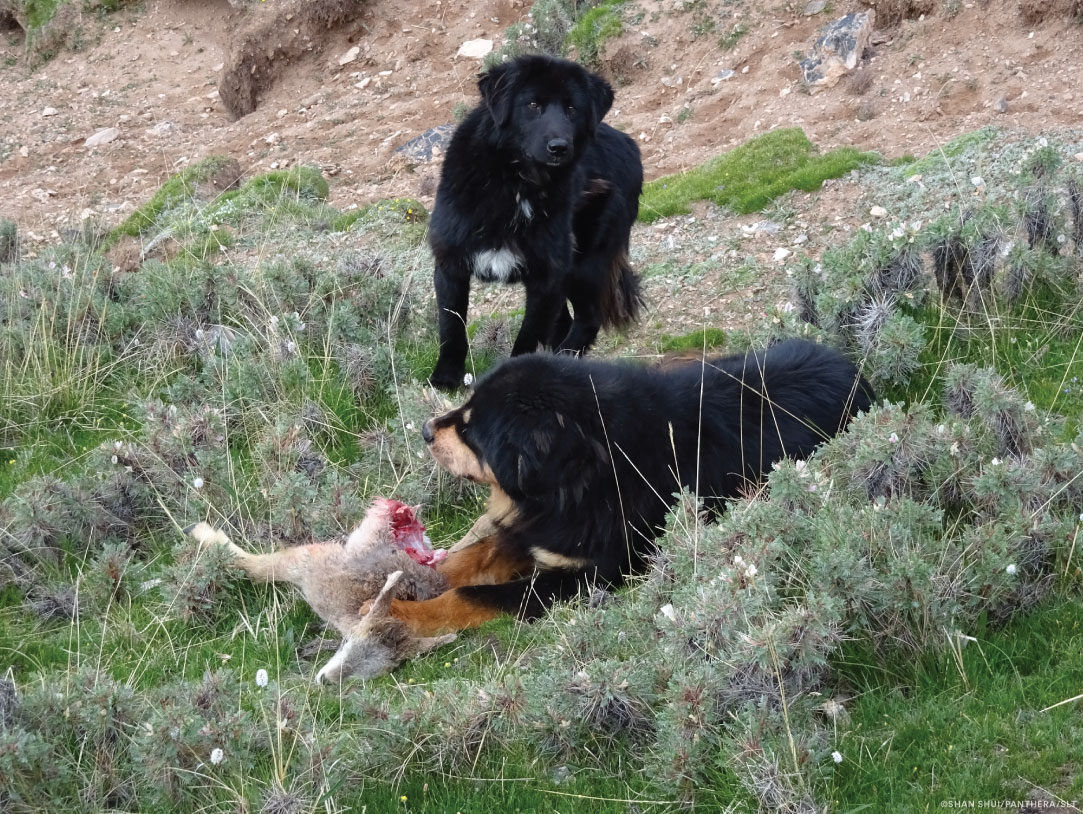 When I caught up, I came upon an interesting scene. The guide and one of the dogs were standing over a dead lamb—and two of the dogs were chasing another animal away, though I couldn’t tell what it was. When I reached the guide, he told me it had been a snow leopard, and the dogs had probably interrupted his or her breakfast.

Clearly this area was a popular spot for wildlife, so we set the camera trap and, lo and behold, a few days later we had this incredible footage of three snow leopards enjoying an afternoon nap.

It’s possible the three snow leopards here are siblings, or the one who is furthest from the camera may be the mother of the other two. We don’t know if any of these big cats is the one our dogs surprised a few weeks before, but it’s certainly possible.

Later, I thought about how this series of events is an excellent illustration of how dogs both help and hinder our research. As research objects and companions, they are brave, loyal, fast and smart—but as the most abundant carnivores on the Tibetan Plateau, they compete with bears and snow leopards for prey, posing a significant threat to local wildlife. As I complete my PhD, I look forward to continuing to learn about these fascinating interactions.

The camera traps Panthera and its partners use around the world help us keep our eyes on the wild. They tell us exactly where wild cat populations are—and who is after them—so we so we can put lifesaving solutions where they're needed most.