Jumping for Jaguarundis: My Incredible Experience in Honduras

In part one of this blog series, Winston Cobb Memorial Fellowship recipient Allison Flores documented her exciting experience looking for jaguars in Belize. Now, she’s off to Honduras to continue her work. Learn about her work in the country’s forests, teaching local children about wild cats and the one wild cat she was able to capture on camera trap...

After spending two months in Belize and having had a great experience, I was ready to start my second and final chapter as a Winston Cobb Memorial Fellow, this time in my home country, Honduras. My activities would take place in the city of La Ceiba on the country’s north coast, 431 kilometers away from home. In October, I packed up and moved.

I began working with the Instituto de Conservación y Desarrollo Forestal, Areas Protegidas y Vida Silvestre (ICF). My colleague Rosa Lina Martínez and I started by having a meeting with authorities of the municipality of Jutiapa and then with the members of Berlin, a community in Jutiapa, to discuss the monitoring of the mountains that they call home. It was an interesting meeting; everyone was curious about a "camera trap", and some were a bit skeptical about it.

After briefly explaining the function of camera traps, we had some comments from the community members:

There are no more animals in these mountains.

Twenty years ago, the tiger (referring to the jaguar), used to live here.

With those cameras we can see the faces of the poachers.

With that last comment, my partner and I knew that the safety of the cameras was uncertain, which we were to find out in a couple of months…

After installing our camera traps in the mountains, we returned after two months. Sadly, we found one of our camera traps had been destroyed. A poacher likely did this, thinking that the camera was taking photos of him for other purposes. With one camera trap destroyed, there was only one remaining. As soon as we arrived at the ICF office, I checked the camera trap, but sadly, again, there were no images of any wildlife. We did not get the expected results, but in science “0” is also a result, not a good one...but in this case, still a result.

Next, along with Fundación Cuero y Salado (FUCSA), Panthera Honduras and I installed camera traps in Barras de Cuero y Salado Wildlife Refuge. We began with the installation of camera traps. The FUCSA team selected six stations into the refuge. To reach each station, we had to walk through swampy areas into the mangrove forest. After a lot of water, boots stuck in the mud and the occasional pricks by thorn bushes, we successfully installed six camera traps. Three weeks later when we returned to the stations to remove the cameras, it was much easier. I guess the team and I had already learned to "swim in the swamps".

Part of the deal was also teaching local schoolchildren about wild cats, especially jaguars! The workshops with the schools took two days. After each day, we felt satisfied that we had taught not only children, but also schoolteachers and some parents about the importance of felid species in Honduras, the ecosystems they inhabit, their diets and what we can do to protect them and their habitat. The returns from the camera traps were also promising, though we recorded no images of wild cats. 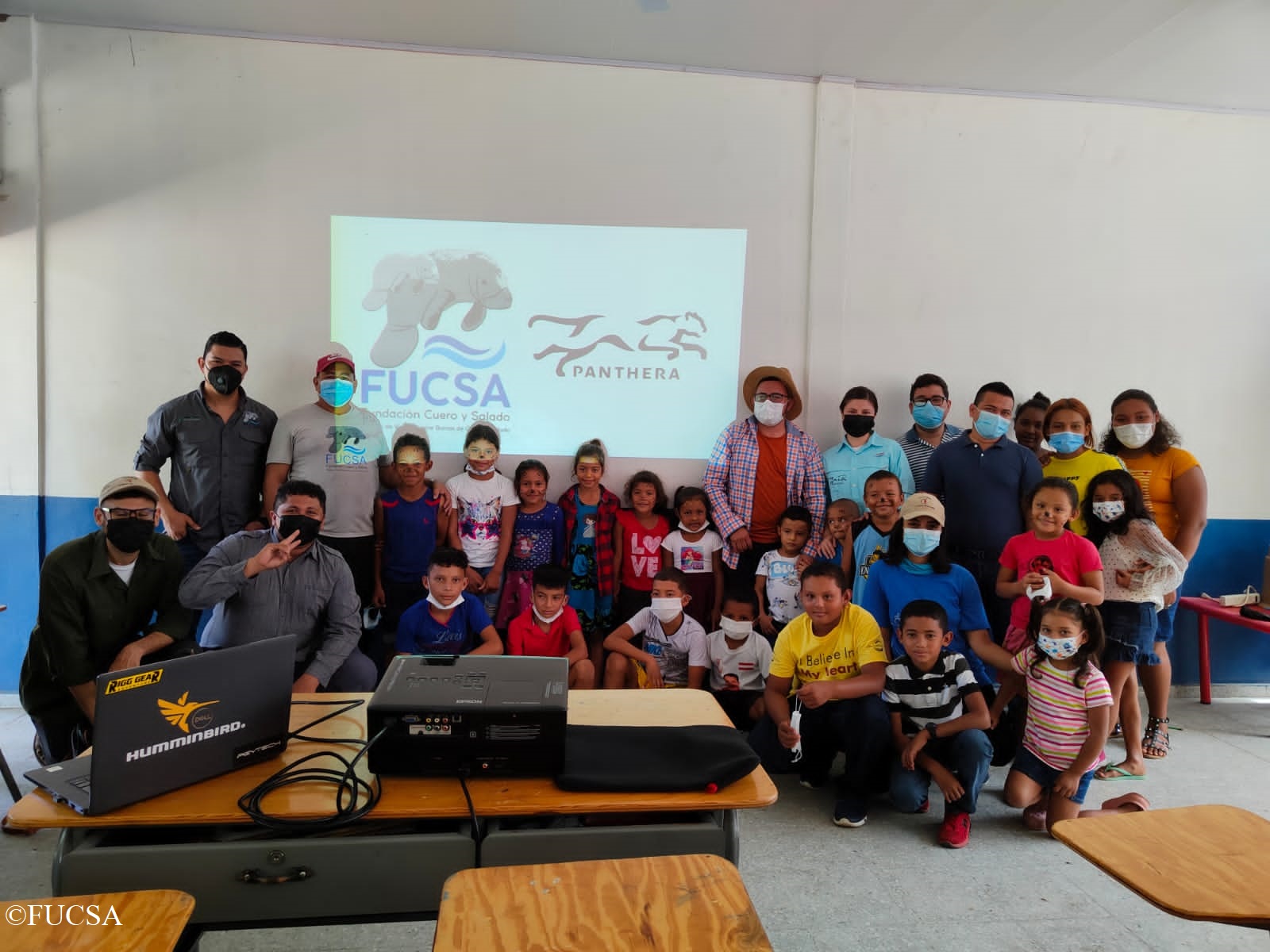 I felt dejected, as I had not recorded a single image of any wild cat. But I had an idea; I decided to do a camera trap survey in an area protected by the military, which has a very healthy forest and close proximity to Pico Bonito National Park, habitat for jaguars.

I had only ten days, but luck was on my side. When I saw this picture of a beautiful jaguarundi, I screamed! I had done it — I had captured an image of a wild cat! 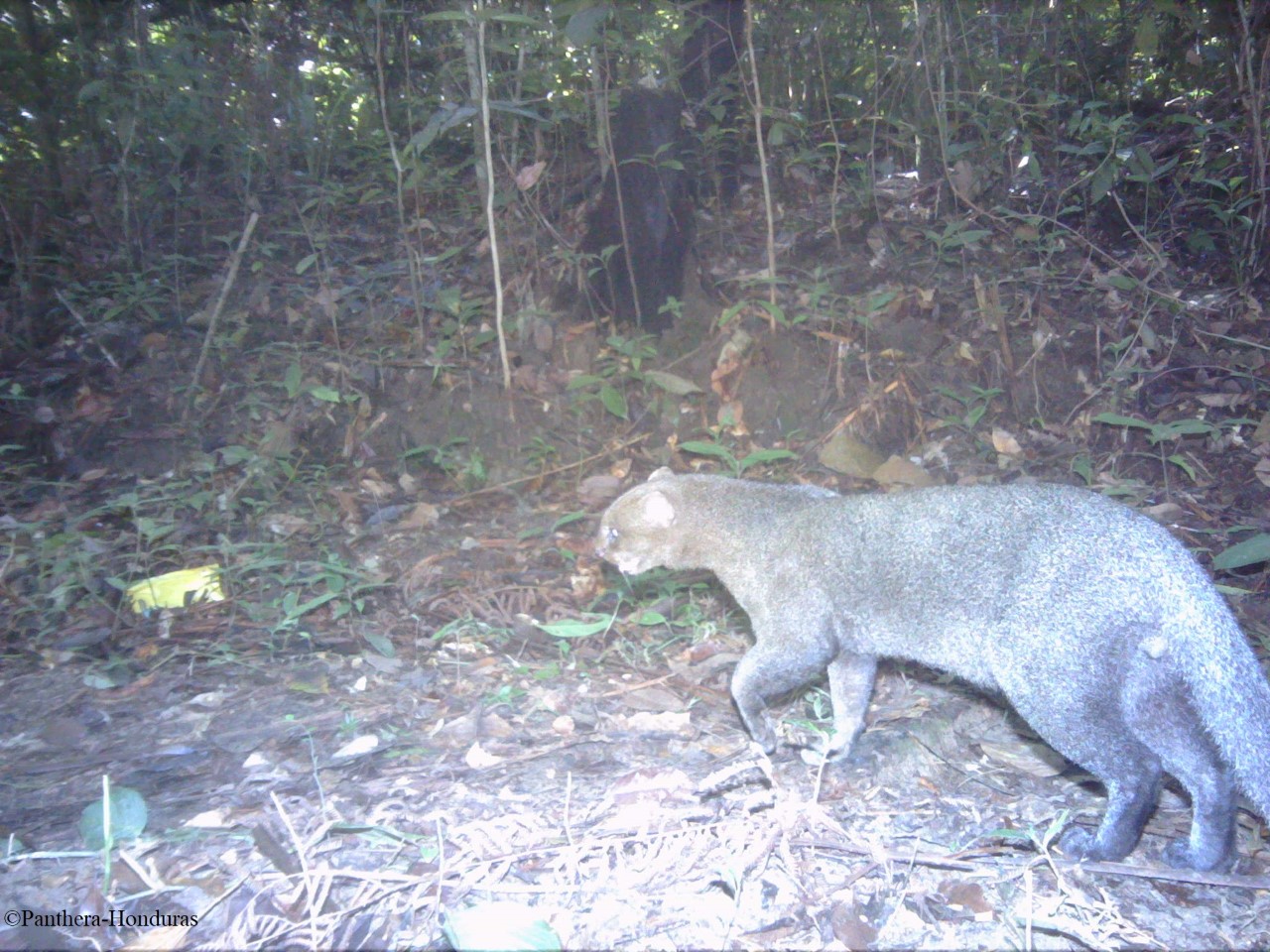 Much like in Belize, my experience as an intern in Honduras was amazing, I learned a lot, and most of all, I loved exploring the mountains of my beautiful country again. The thrilling experience of being a Winston Cobb Memorial Fellow had come to the end, but I came away with the best of it — the amazing people I met, the new places I encountered, the knowledge I gained for my blossoming conservationist career and the small seed of conscience and advocacy I could plant in people of all ages in this region.