Conserving the Mountain Lions of Texas

Dr. Patricia Moody Harveson is a wildlife biologist who specializes in the study of carnivores, including pumas.

I have always had a love for wild things. Growing up, my favorite animals to see were always the carnivores…coyotes, foxes, skunks, raccoons. And being from West Texas, I was fascinated by mountain lions.

I began studying the mountain lions of West Texas right after I graduated with my doctorate. I was awarded funding from the National Science Foundation to study mountain lion habitat use and transboundary connectivity between the US and Mexico. After that, I spent the next 15 years working as a professor and research scientist for the Borderlands Research Institute (BRI) at Sul Ross State University. As head of the carnivore research program, I was able to study a variety of species, but most of my time was spent on mountain lions.

In Texas, mountain lions and all carnivores are still treated like varmints, which is astonishing considering they have such incredibly important roles in the function and health of our ecosystems. The more we learn about them, the more we appreciate their role in the ecosystem that supports all life, including humans. 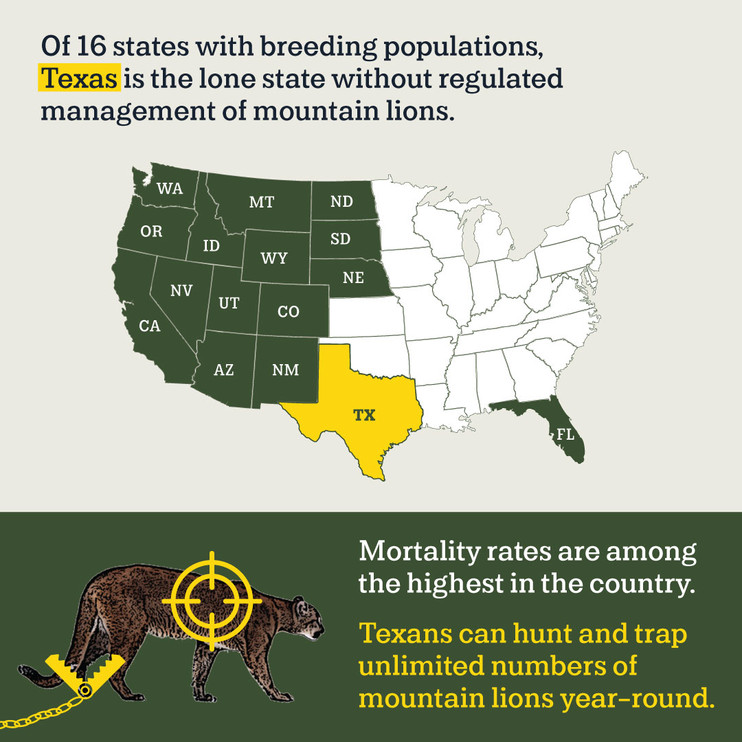 However, most people probably don’t know that mountain lions in Texas are not regulated by the Texas Parks and Wildlife Department. While game animals like deer and quail are managed to conserve their populations and have harvest rules on the number and seasons that they can be killed, non-game species like mountain lions don’t have these protections. Anyone with a hunting or trapping license can kill mountain lions without any restrictions to the number or means by which they are killed.

We have learned through our past research that mountain lion populations suffer from a high rate of mortality from trapping and hunting. Their distribution in Texas is limited to two breeding populations. The West Texas population is heavily trapped, and the South Texas population is thought to be declining. Both of these populations, as well as lions in other areas of the state, are in immediate need of conservation through science-based management.

Over the past 50 years, there have been a number of attempts to change mountain lion regulation in Texas. Conservation organizations have petitioned for changes in status and added protection but with no success. Attitudes towards predators have changed over the past century largely in response to an increased understanding of the important role that predators play in our ecosystems. People are increasingly aware of the benefits of keeping predators in our wild areas as revealed by public attitude surveys. 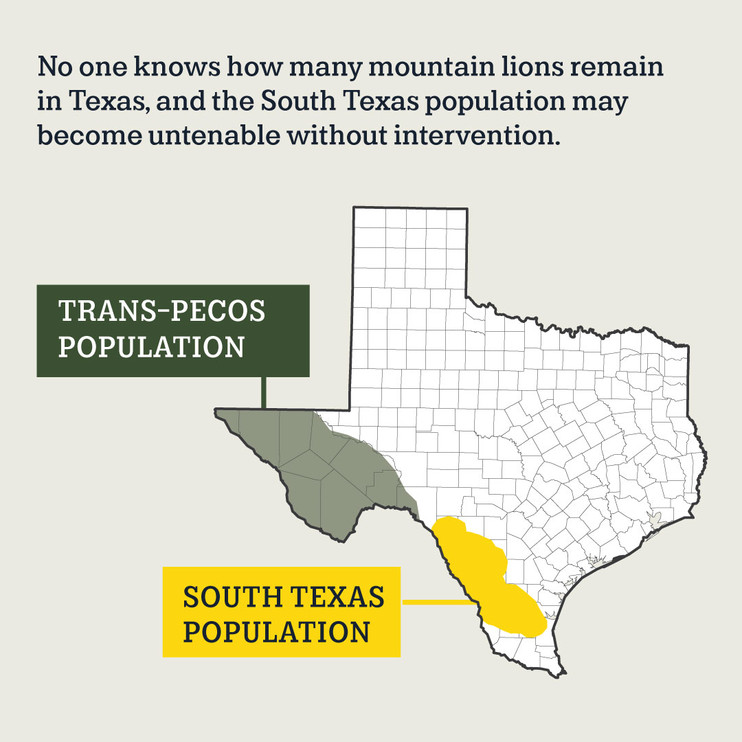 It's time for Texans to choose conservation over inaction and to remedy the ongoing neglect of this iconic keystone species. This should start with a defensible, science-based management plan for mountain lions written and enforced by the Texas Parks and Wildlife Department. A data-driven plan developed with broad stakeholder participation that includes population monitoring, reasonable limits on harvest, regulations on harvest methods and mandatory harvest reporting will ensure that mountain lions continue to roam in Texas.

Texans for Mountain Lions, a coalition of individuals and organizations, is moving the needle in the right direction. They have filed a petition with the Texas Parks and Wildlife Department (TPWD) to initiate regulatory changes that would:

If instituted, such actions will make critical, much-needed conservation gains for mountain lions in this great state.

Studying large carnivores can require a lot of resources in terms of researchers, equipment, and funds. There’s not a lot of money available for research on nongame species, but I was very fortunate to have the support of several organizations including the Summerlee Foundation, the Horizon Foundation and the Davidson Charitable Foundation. I also had the support of many private landowners in West Texas.

Dr. Patricia Moody Harveson is a wildlife biologist with over 20 years of experience studying large and meso-carnivores including mountain lion, black bear, jaguar, kit fox, coyote, ocelot, and bobcat.  For the past 15 years, she was a research scientist and professor at Sul Ross State University where she served as the former Davidson Endowed Chair for Conservation Biology with the Borderlands Research Institute. During that time, she led a comprehensive investigation of mountain lions of West Texas. Dr. Harveson has published dozens of scientific and popular articles on carnivores and other wildlife, including co-authoring a recent article in the Wildlife Society Bulletin titled “It’s time to manage mountain lions in Texas.” Read the full article here.