Annual Report 2021: The Next Generation of Wild Cats

Panthera's 2021 Annual Report reflects on the next generation of wild cats and a new era of conservation, one in which we focus on science, build on lessons from the past and always look toward the future. Within these pages, you'll find stories about the new generation of puma kittens, lion cubs and even Arabian leopard cubs – and our steadfast efforts to ensure their future. Don't miss this message from our CEO, Dr. Fred Launay.

"Despite the challenges of 2021, we forged ahead to shape a world for the current and next generation of wild cats. We had no choice; the threats — poaching, habitat loss and fragmentation and human-wildlife conflict — were more acute than ever before. Guided by science, we tackled head-on the issues threatening wild felines big and small." 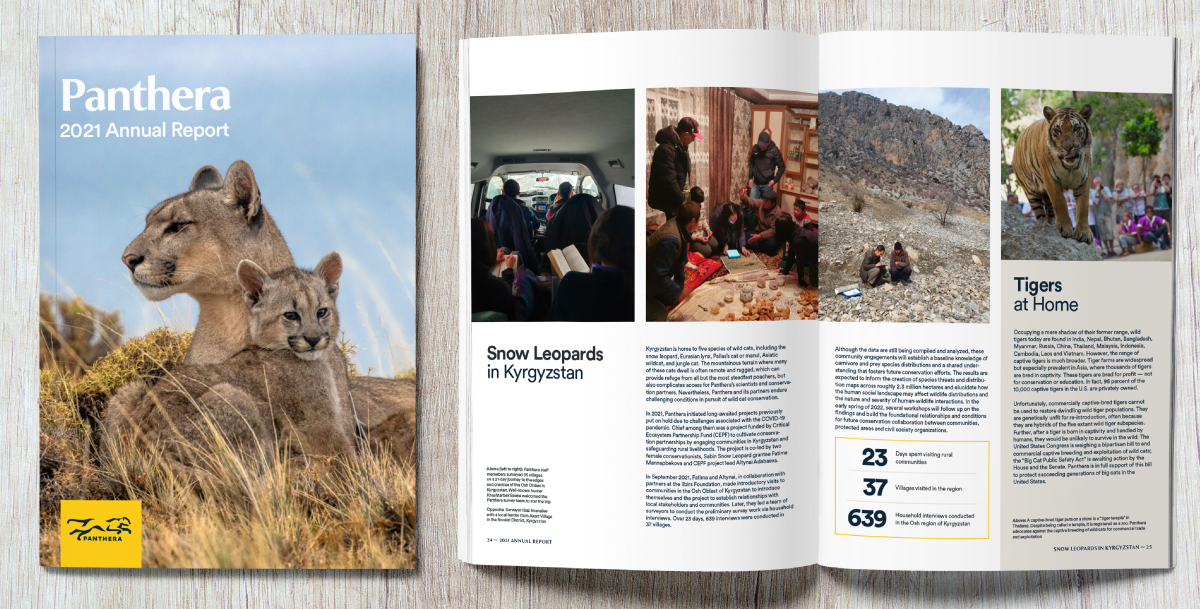 "Around the globe, the next generation of cats, defended by a rising cohort of Panthera’s leaders, is opening its eyes and peering into an exciting new world. They awaken to an environment that is stronger, safer and better suited for wild cats than in 2005. Wild cats are better off because of Panthera, as are we."

Founder and Board Member

Chair, Panthera Board of Directors

Conservation Wins for the Next Generation

The fastest land animal on the planet

120: Number of camera traps Panthera installed in Luengue-Luiana National Park, Angola for a 2021 survey to monitor seven types of cats, including cheetahs

The strongest swimmer of the big cats

600: Approximate number of jaguars affected by the 2021 wildfires that raged across the Brazilian Pantanal

The wild cat with the largest range

16: Number of Arabian leopards currently in the National Wildlife Research Center in Taif, Saudi Arabia. (A huge achievement for this species, identified as Critically Endangered on the IUCN Red List™.)

Apex predator of the African savanna

50: Percent increase of the population of lions in Senegal’s Niokolo Koba National Park measured in 2021, after a ten-year intervention.

Ecosystem engineers that create new habitats for other species

42: Number of pumas that were safely studied by our team in Washington State in 2021. We follow pumas to document their diet, interactions with people and survival rates.

2030: Target year by when Panthera will have created conservation action plans for all 33 species of small cats

The big cat with the longest tail (up to three feet long!)

2.3M: Number of hectares of snow leopard range across Kyrgyzstan that Panthera and partners began mapping in 2021. The map also will include regional wildlife distributions and human-wildlife interaction data

The largest of the big cats

288: Percent increase in the number of tiger poaching-related arrests in Thailand, thanks to our proven anti-poaching strategy

Cats of the World

312: Number of Panthera project sites worldwide, and growing. Please click the link below to see a map listing our targeted conservation site locations.